Feminism Ruins Relationships. Or not.

I was on Twitter the other day and saw a post which contained a link to this little gem from Thought Catalog: 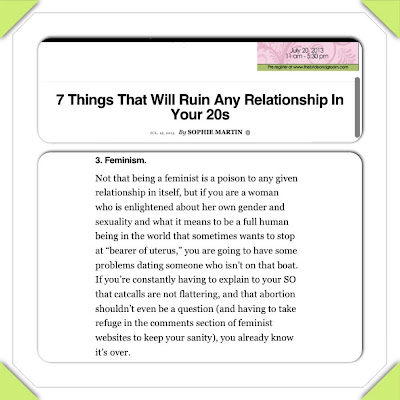 First of all, I want to point out that it's obvious the author of this post was trying to remain PC and not ruffle any feathers. She even spends most of the first sentence showcasing her seemingly positive views on feminists.But, by the end of that sentence she's already missed something pretty huge: What kind of "enlightened" women, who sees herself as a "full human being" would WANT to date someone who "isn't on that boat?" Uhm... none of us.

But let's pretend that this whole thing isn't a moot point and analyze all the other (unintentional?) anti-woman elements of this paragraph.

The "someone who isn't on that boat" comment bothers me for another reason too; it seems, to me, to be saying that there exists a valid way of thinking that does not include feminism. Of course, this is untrue. Any person who doesn't think men and women should be equal, who doesn't think that women should be able to control their own lives and bodies, DOES NOT have a valid opinion. Not being on board with feminism isn't the same thing as not being on board with chocolate ice cream.

"But wait," I can already hear some of you saying, "just because a person doesn't want to refer to themselves as a feminist doesn't mean that they aren't in favor of women's rights."
Well, that may be true. However, the author here lists the things that this hypothetical potential partner isn't on board with. She says the person isn't on the boat that recognizes the virtues of women who are "enlightened" about their "gender and sexuality," and the fact that a woman is "a full human being." So really, the only other "boats" out there are the USS Bigotry and USS Misogyny. I think it's a lot more likely that the sexist asshats, who can't accept that women ARE their equals, are a lot more to blame for the failed relationships the author is trying to warn us about.

Which brings me to my next point;  this paragraph is aimed at the wrong party. Feminism isn't responsible for doomed relationships, misogyny and sexism is. Since none of the rest of the points in the article were particularly aimed at women, it wouldn't have messed up the flow of the article at all to change the focus of this point to be more accurate and less horrifyingly sexist.

The problem is the culture. I'm sure the author did research to write this post and found some study somewhere that had the same backward focus. Since our society doesn't question misogyny nearly as often as it questions feminism, she probably just didn't think too much about it and wrote the point. That's what we need to change. We HAVE to think about things we see, things we read, things we hear people say, things we say ourselves. Like I said before, I feel like this author tried to write the point in a way that didn't put women down, but she needed to have tried harder. We all need to try harder.

That being said, I offer you a rewrite!

Being sexist can be a poison to any given relationship, especially if you are dating a woman who is enlightened about her own gender and sexuality and what it means to be a full human being in the world that sometimes wants to stop at "bearer of uterus." You are going to have some problems dating someone like that if you aren't willing to rise above the culture and view women as equal human beings. If she is constantly having to explain to you that catcalls are not flattering, and that abortion shouldn't even be a question (and having to take refuge in the comments section of feminist websites to keep her sanity), you already know it's over.
P.S. If this describes you, stop being such an asshat.