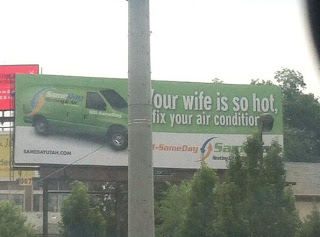 The first time I saw it I was mainly angry about the objectification issue. I mean, has anyone else noticed that when a guy complements the looks of another man's wife or girlfriend it's often with a tone which is eerily similar to the one he uses to complement his car or new barbeque? I have, and I'm not amused when I see that thought process justified and further normalized by advertising.

I was already angry the first time I saw this billboard. But I drive past it almost every day so I noticed the rest of the sign and became even more upset.

Now, in addition to the implication that a person who is also a wife, and therefore a woman, would be unable to fix an air conditioner, there's the added insult in the fact that this is a advertisement for a company which fixes air conditioners, meaning that the implication is actually that a woman is incapable of making the phone call necessary to get the repair made.

So, you have to ask yourself, why does society think that women are incapable, even of making telephone calls? Maybe because society still sees men as the only humans capable of earning significant money, and therefore, the only humans who should be making calls which will dictate how that money is spent? But that's definitely not true and like it or not, men are going to have to face up to that. See Gina Rinehart. Or maybe they don't see women as incapable anymore, but want us to continue to feel incapable in order to perpetuate the patriarchy?

I don't know... but I do know that even as a wife, I am perfectly capable of assessing a situation, checking our bank account (to which I have contributed about 50% throughout our marriage), and calling a repair person. Not only that, but give me the tools and instructions and I bet you I could fix the damn thing myself (shout out to my mom and daddy, who aren't sexist asshats, and taught me how to do things to keep me safe and comfortable regardless of if they were "girl things" or "boy things")!

While all that makes me pretty mad, I think the thing that makes me most frustrated is the fact that they could have kept their joke and not been all anti-women at the same time! The billboard could have said:

You're so hot,
fix your air conditioner!

See! Now it's funny, charming, and not misogynistic! The funny part, the misdirection, is still there, but it isn't discriminatory, based on gender anymore.

So why didn't they do that in the first place? I wish I knew. Which is why I sent them an email to ask about it.

***Update***
In my email I simply pointed out why the sign is sexist and offensive and expressed my confidence in the possibility that the sexism hadn't been recognized. I also kinda asked them to take it down.
Here is the response I received back:

"Hello Jenna,
Thank you for sharing your feelings about the sixth south billboard.  We have run this
particular campaign off and on for approximately seven years.  We have received hundreds
of compliments and no compaints during the campaigns.
Aside from branding etc., the goal of our advertising is to try to add some simple humor in an otherwise
boring category to our stressful day-to-day lives.  Though I respect your view, your concerns never
entered our minds.  There is no subtle message intended.
I apologize if we offended you.  Thank you for your input and we will take it into consideration in the future.

So, I guess mine has been the only complaint about the billboard. I know I don't have many followers here, but if you agree that this billboard is sexist and should be taken down I'm sure Ms. Weaver would like to hear about it.
Posted by JennaRae at 11:50 AM