Dehumanization: Welcome to a Woman's Life

One of sexism and sexual violence's best tools is dehumanization. The word means exactly what it sounds like. When you dehumanize a person you are treating them as less than human; less capable of experiencing human emotions (like terror and joy), less capable of thinking like a human, less... you get the idea.

I see subtle dehumanization of women daily. One quick example: when I'm with my husband and he is speaking with a group of men I am often completely ignored, as if I'm an accessory, by most of them (not by my husband of course).

I also see a lot of overt dehumanization, particularly in the form of rape jokes. Here's a real winner: 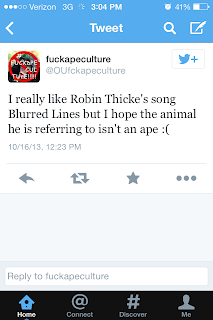 Now, I'm no friend to animal cruelty. In fact, I'm a vegetarian. Well, I'm mostly vegan, besides a little cheese every once in awhile, but I digress.
I do hate the idea of any living thing suffering. But that's not the issue. Blurred Lines is about a woman, obviously, and the implication in this tweet is that it's okay that he's talking about a woman, but it wouldn't be okay if he were talking about an ape.

So, as a culture, what are we supposed to infer from this? Well in it's simplest form we could probably describe it this way:

Any other humans have a problem with this?

This is also really a perfect example of how the dehumanization of women has led to so much sexual violence. If a woman isn't even as valuable (for lack of a better term) as an animal, why shouldn't we treat her like an animal? I mean, in the United States we kill millions of animals a day for human purposes (food, research, etc), so we obviously (as a culture, not individuals) don't value their lives or their right to live freely or make choices. So when a woman doesn't consent to sexual activity why would the perpetrator care? It's not as if he's harming a human.

We can think of it another way too:
Say I told you that I will give you $10 if you kick a bean bag chair as hard as you possibly can. Most people would probably take me up that offer.

Now what if I told you that I will give you $10 if you kick a person as hard as you possibly can. Most people wouldn't do it.

Why? Because the bean bag won't feel pain, you're getting what you want ($10) without taking something away from someone else (comfort, feeling safe).

So, when we equate human beings to objects, known as objectification (which is a form of dehumanization), we make it easier to justify violence against them.

While thinking of a woman in the same terms as a bean bag chair is obviously much worse than treating her like an ape, the concept is the same.